Why Roundnet in Schools 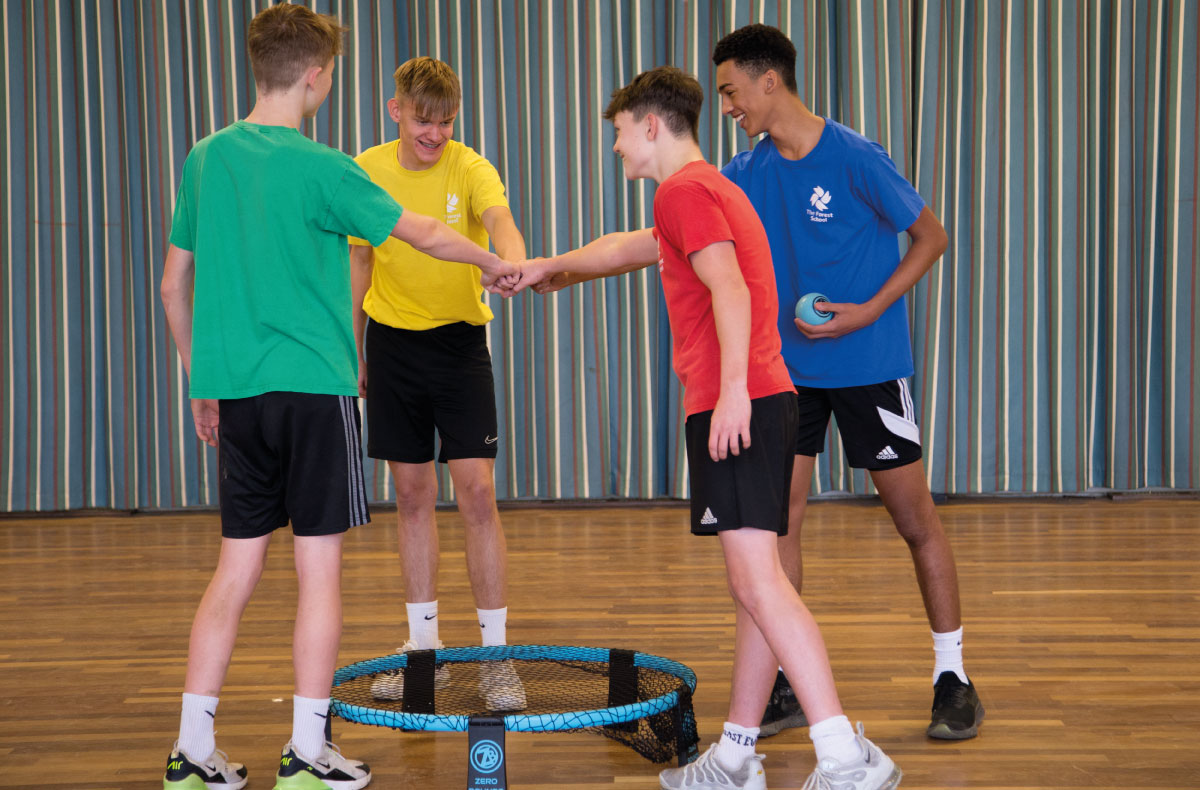 When I first saw roundnet, I was down at my local park with some friends. One of our friends had been gifted a set and brought it down to our usual summer weekend BBQ. Instantly I was hooked on playing the game myself, but moreover I couldn’t help but look at this from a teacher’s perspective. The sport could provide so many benefits to children, helping both physical and mental development, whilst also allowing for the growth of soft skills. Not long after I started playing with my University students, who were training to become PE teachers themselves. Before I knew it I had so many trainee teachers hooked and witnessed first-hand the potential for the sport. An ex-student and I started to set-up taster sessions and developed a coaching company, with the aim of helping to get roundnet into schools, based off of all we had learnt and researched.

So, I thought it would be a good idea to share this, so that other teachers thinking about integrating a new sport, could see all the benefits as to why this is a great game to help widen your curriculum. What follows is a brief run-down including 8 main reasons to implement roundnet in your school. More detailed information on these can be seen in our other blogs under “Physical Education” and “Sports Pedagogy”.

As teachers/coaches, we see the physical and mental benefits of roundnet (that’s why we started Zero Bounds!).

Since the National Curriculum (NC) reform during the 2015/16 academic year, a shift can be seen in the range of sports and activities provided by Physical Education (PE) teachers. This change is seeing more teachers being open to “alternative” sports and activities, many of which are already adopting roundnet.

The game allows for key aspects of the curriculum such as; developing physical literacy, participating in team games, developing tactics and improving performance in competitive games. It also allows for greater physical activity, and greater engagement, all of which we will discuss further below. The game fits well within the NCPE, and many of the following sections link back to how it can meet the aims of the NCPE, as well as the 2019 Sports Activity Action Plan. This sport is already being adopted in many schools for core PE, as well as after-school clubs and for break time activity, which means that before long, inter-school competition can occur, hopefully working with the nationally recognised organisation, The School Games.

Roundnet is ideal for achieving all domains of learning (psychomotor, cognitive, social & emotional), which are a critical element of the NCPE. These are enhanced through roundnet due to a “small-sided games/modified games” format. The 2v2 or 3v3 format provides greater engagement and opportunities for practice. Less players means more dependence on every player to be involved, as well as more opportunities for physical practice. Simply, less players equals more touches, and more involvement can increase the opportunity for skill development as well as tactical awareness.

Much literature has highlighted that adopting SSG practices that meet the basic psychological needs of all pupils including competence, autonomy and relatedness, further facilitate intrinsic motivation and self-determination. It has also been stated that SSG, when carefully modified, making them inclusive with guided questioning, can facilitate cognitive growth (Alcalá & Garijo1, 2017; Almeida, Ferreira, & Volossovitch, 2013; Gubacs-Collins, 2007; Van Acker, Carreiro da Costa, De Bourdeaudhuij, Cardon, & Haerens, 2010). These cognitive skills have also been deemed transferable across other sports, as well as subject areas if the learning environment is fun whilst providing opportunities for autonomy and feedback (Bunker, 1991; Billing, 2007).

Two of the main aims of the SSAAP Policy (2019) are to increase activity levels and participation with disengaged students. It has been said that “60minutes of physical activity is needed within the school day” as stated by the department of education and department of health. Roundnet has been found to show increased engagement with disengaged students (Mantle & Singleton, 2021) and when looking at the growth of the sport in the last 5 years, you can see that participation throughout the whole population is consistently on the rise.

The nature of the sport also allows for increased activity levels. The 2v2 format, coupled with the fact that the game is 360°, requires participants to move more. This movement not only helps with activity levels, but also attends to one of the other main aims of the SSAAP, which is to focus on physical literacy. The movement and skills required contribute massively towards meeting these aims and more importantly, helping students to be more active, establishing healthy lifestyles, and physical activity for life.

The game is so easily adapted for all abilities, which we as teachers know is paramount to student’s engagement and success. If students find the game too difficult, they will become disengaged. We as Zero Bounds have provided 3 versions of the game on the box to get you started and have also created a YouTube channel of games and activities for you to use with your students (which we are adding to all the time).

You can use these to help get you started and check out our affiliated coaching company Spike-it Coaching to find out more about continuing professional development (CPD) or the GB Roundnet  approved Level 1 qualification for teachers and coaches.

To help get junior and secondary age groups playing and competing within and against other schools, Junior roundnet rules have been created with GB Roundnet (NGB for Roundnet in the UK). These have been created for schools, so that you can more easily create standardised tournaments, engaging more schools and hopefully joining The School Games organisation for sport. These rules can be found on the Zero Bounds Schools page or via the GB Roundnet Website. 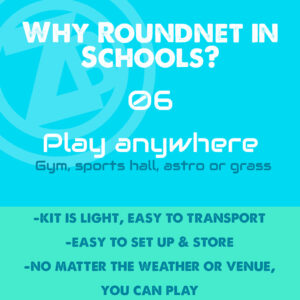 6. Play Anywhere – Plus, Store with Ease

With no need for court lines and the equipment being so light, you can take the game anywhere.

The game is regularly played on grass, in sports halls, on AstroTurf or sand. Whatever the weather, you can play with little hassle. We have also seen schools taking them on residentials for evening activities. When it comes to storing or transporting them, you have options. The sets can pack away in the bags provided, or they can be stored already set-up, taking up as much room as a hula-hoop. The collapsible legs allow you to store the sets flat, taking up little room in your store cupboard and allowing for a quick set up at the beginning of each session.

The game also provides a different perspective of personal development opportunities due to it being a self-officiated sport. Some other non-traditional sports have been found to enhance autonomy due to their self-officiated nature. Research suggests that the exemption of a third-party referee making the decisions, instils sportsmanship and an ethos based on trust with players expected to play by the ‘spirit of the game’. Students stated that over time they trusted their teammates and opposition, which maximised the fluidity and quality of play, within both a competitive and rewarding environment (Robbins, 2004). Within a school context, presenting a self-officiated sport could similarly encourage honesty and trust by providing children with the autonomy to make their own decisions regarding the game outcomes. As such, the manner of the sport could promote good etiquette, enhancing the personal development of pupils whilst fostering positive attitudes to PE, all identified as fundamental for youth development and self-determination (Bailey, Cope, & Pearce, 2013; Petitpas, Cornelius, & Van Raalte, 2007; Säfvenbom, Haugen, & Bulie, 2015).

It is no surprise to teachers that females are one of the target groups for increasing physical activity, as set-out by the afore mentioned SSAAP (2019).

Females are deemed to favour activities that facilitate the development of social and emotional skills, as well as favour non-contact sports, which is often reflective in the nature of non-traditional sports (Kjønniksen, Fjørtoft, & Wold, 2009). Students are regularly split into single-sex classes, as this was said to better facilitate the needs of the differing groups. However more research into non-traditional sports and co-ed classes has shown to improve female participation, whereby the activity levels are higher than their male counter parts (Van Acker, Carreiro da Costa, De Bourdeaudhuij, Cardon, & Haerens, 2010). Previously, girls have mentioned that many traditional sports have been overused within PE which had become tedious. From this research it has been suggested that new, non-traditional sports are likely to engage and motivate them (Kjønniksen, Fjørtoft, & Wold, 2009). Collectively using these findings, it has been said that non-traditional games alongside the use of coeducational classes may stimulate the learning and invoke high levels of activity amongst both genders.

These are just a few reasons for why Roundnet in Schools may be the ideal way to widen your curriculum, to help increase engagement and invoke higher physical activity levels amongst your students.

Although, as teachers we of course all know that it is not just the sport and its format, it is also the delivery of said sport. If you attempt to teach the game with full rules from the off, don’t dissect it into its principles of play, and fail to consider appropriate progressions for your students, then success and thus engagement will be diminished. Hence our creation of resources, videos and continued work with Spike-it Coaching to enhance the availability of information and training for teachers looking to integrate the game into their curriculum.

So, check out our other blogs, resources, and YouTube channel, before then swiftly running to your head of department to get roundnet in your school!

Read more of our blogs here

Subscribe to our newsletter and get entered in our monthly prize draw!